Serial entrepreneur, Brian started Gulf for Good in 2001 when he and his friends recruited 49 people to trek to the summit of Kilimanjaro to buy ambulances for use in Namibia. Brian is an adventurer, born in India and traveling since, Dubai became his home in 1976. Enviroserve, Universal Express, and Ductac are some of his companies.

A passionate educator, Anne has done 16 challenges, including Everest Base Camp in 2015 (when the earthquake occurred), where she saw first-hand the heart-breaking devastation caused to so many communities. When not in the classroom, stair climbing or beach hiking, Anne loves cooking, baking and feeding people – after all, she is Irish.

Nick grew up in West Africa and has lived throughout the Middle East and in Hong Kong. He first came to the UAE in 2009 and has raised three children here. Having spent 16 years in the British Army, Nick enjoys both adventure and a challenge. He has a broad corporate reach and a kaleidoscope of experience to bring to the Board. He has witnessed first hand the plight of children in a number of countries and has an enduring passion to try and leverage his network and life lessons to empower more people to do more good for the lives of children.

Born in East Africa, Barrister Jim runs his own practice in Dubai, where he has been living since 1989. A founder member of the Board, Jim has done several challenges in Tanzania and Morocco. In his spare time, Jim can be found working with Larchfield Children's Home, one of our main charities, of which he is the Founder.

Kat began her Gulf for Good journey in 2007 with the phenomenal Everest Base Camp challenge. She was bitten by the challenge bug and has since ran a cross country Marathon in Ethiopia, raced Tuk-Tuks around Sri Lanka and summited Kilimanjaro. Originally from the UK, Kat moved to Dubai in 2005 “for six months”. over 15 years later, with a husband and two kids she’s still loving the desert and the opportunities it brings to see the rest of the world.

Passionate about combining strategy and marketing, Lana has held numerous management positions in the UAE. Her resilient history in marketing and advertising has led her interest in Gulf for Good which combines her love for both kids and fitness. Lana believes that leaders should create change beyond the four walls of an organisation, building vigorous communities that fabricate real world impact. Travelling to over 60 countries, you are most likely to find Lana watching a sunset somewhere in the world.

Passionate about the interplay between corporate strategy, operations and finance to achieve goals, Chris sits on the Gulf for Good Board as Finance Director. Chris grew up in Zambia, South Africa and the UK before moving to the UAE in 2006.  He has a love of adventure travel which spans over 50 countries. He has trekked to the base camp of K2, raced tuk-tuks across Ski Lanka and Cambodia, sea kayaked in northern Madagascar, cycled the Cape Epic for Médecins Sans Frontières and cycled the entire Tour de France for the William Wates Memorial Trust.

Founder of Thrift for Good and on the Board of Directors of Gulf for Good. Seriously addicted to mountains and fundraising for children's charities are Jen's two favourite pastimes. She previously worked in the Operations Manager role and left it to start Thrift for Good, Gulf for Good's sister social enterprise reselling preloved items. Profits are then donated towards Gulf for Good charity projects. Check out thriftforgood.org

Born in the UK, Kevin has lived in the United Arab Emirates for the past 15 years and considers this his family home having raised 2 children here.

Working for the past 20 years in the corporate world Kevin started his own company in 2015 which has grown rapidly, now working across many international locations. This experience will bring a wide range of knowledge to the Board of Gulf for Good.

Having been in the region for several years Kevin is looking forward to being able to use his network to widen the support and recognition of Gulf for Good.

Originally from the UK, Andrea has made her home predominantly in the UAE with her family since
2011, in addition to enjoying a short spell of 15 months living in Singapore.

A passionate travel professional for over 20 years, Andrea has travelled to all seven continents, including
Antarctica, the ultimate expedition travel destination. With overland adventures in Africa, the Middle
East and Asia under her belt, she is always seeking out the next bucket list destination and brings this
desire and enthusiasm, coupled with her love of all things fitness, to Gulf for Good.

Milly loves just about any activity that will get her outdoors and pushing her limits. Having trekked across the Indian Himalayas, travelled to many parts of the world, and taken on the role of Trek Leader for the Women’s Heritage Walk, a 125 km hike across the UAE desert, Milly is super excited to channel her competitive spirit to help others around the world as part of the Gulf for Good team!

Naveed comes from Pakistan and has been in Dubai since 1991. She has seen Dubai develop into the cosmopolitan metropolis it is now. She is an avid animal lover and lives with her rescued kittens. She is an entrepreneur who loves to dive into work challenges. She can also hold a conversation in American sign language! She loves to workout and practice Muay Thai a few times a week! She is a problem solver and is hoping to support the amazing team at Gulf for Good and be a part of their success helping more and more children around the world and spreading joy as they go along.

Architect, photographer, explorer and Gulf for Good challenger, Gerry has been living in Dubai with his family for the past 12 years.  As the GM of a successful survey consultancy in the UAE, Gerry is passionate about working with charity organisations as well as exploring new countries and learning about their cultures.

Gerry did his first challenge with Gulf for Good to Tanzania where he summited Kilimanjaro in 2012 and has done a few since, including Bhutan in 2016 with Marco, his 16-year-old son.  Gerry is looking forward to his new challenge as a Gulf for Good Ambassador.

Yas, originally from Kashmir, came to the UAE over 15 years ago, with a background in Marketing, PR, Comms and Media, eventually setting up her own Advertising Agency company YAS Media Group in 2010. Yas prides herself on customer service and always has a winning smile! When not busy running her business Yas enjoys nature and the outdoors, having climbed several mountains with many more still on her to do list. 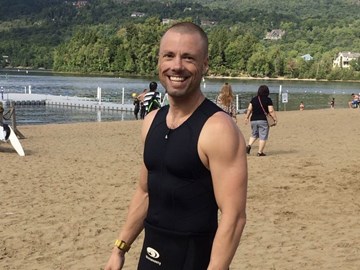 Martin is an outdoors enthusiast and a self-confessed challenge freak. Originally from the UK, Martin has lived in the Middle East since 1998 and has been involved with Gulf for Good since participating in the very first Gulf for Good ascent of Kilimanjaro in 2001. Martin has completed and led six Gulf for Good challenges, and has spent several years on the charity's Board of Directors. Martin is an all-round sports enthusiast but devotes much of his time to endurance cycling and swimming activities, including numerous Ironman and long-distance triathlon events around the globe. In 2021, Martin completed an ‘indoor English Channel’ event, a continuous swim of 33 km in a pool in Dubai in aid of the Lebanese Red Cross. Martin is a devoted father to his six-year old daughter Amelia, who will soon be out-running, out-swimming and out-biking him!

Andy moved to Dubai from the UK with his family in 2002. As an Audio and Communications expert, he has worked on some of the largest events in the region & successfully ran his own business for over 15 years. Having participated in 2 overseas challenges in Uganda & Vietnam/Cambodia, he manages to balance his hi tech and adventurous lifestyles perfectly. Andy is regularly spotted Mountain Biking and Hiking during the winter months with Gulf for Good. 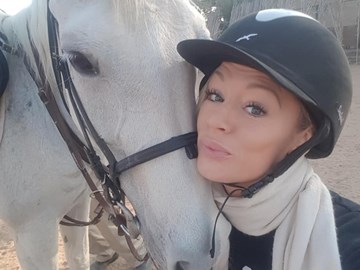 Dawn moved from the UK to Dubai 12 years ago and spent 9 of those years as a Senior Financial Planner. Loving a challenge on every level Dawn then decided to set up under her own consultancy licence to broaden her opportunities. Dawn supports the Gulf for Good family as an Ambassador for Corporate Partnerships. An outdoor enthusiast who you would usually find on horseback Dawn has been taking part in Gulf for Goods local training and challenges including hiking the Ski Dubai slopes and is ready and eager to book her first life changing international challenge.

Derek arrived and settled in Dubai in late 1985; working in various IT fields, until his retirement in mid 2018. Having been raised in Alexandria, Egypt, in his early years, he is an Arabic speaker. In fact Derek has spent more than half of his life in the middle east, which has helped him build a wide network of contacts, in many walks of life.

He has undertaken several challenges with Gulf for Good, over the years, starting with Kilimanjaro in 2003, and more recently volunteering in Malawi, at the Sparkle Foundation. In addition, Derek has trekked in Bhutan, Vietnam, Patagonia, Cambodia, Kazakhstan and India. Like many Gulf for Goodies, he is an avid traveller, having visited 67 countries and lived in 8 of them. His current bucket list includes Iceland, Namibia, Cuba, and Tajikistan.