Gulf for Good has been building schools with this beautiful charity since April 2018.

Street Child is an incredible charity, UK based they work to protect vulnerable children and improve access to education in some of the poorest communities around the world. In Nepal, G4G is partnering with Street Child to work in the brick kiln communities by building schools to provide an education for the children of these communities who would otherwise receive none.

Schools in Brick-Kiln Communities – Giving early year’s education where there otherwise would be none.

The Kathmandu Valley’s brick making business is a major part of the Nepalese Economy and has rapidly expanded in the rebuilding efforts after the 2015 earthquake. There are currently approximately 1,100 brick kilns; where over 175,000 workers migrate six months each year from 45 districts around the country, in search of seasonal work. Limited access to schools in the surrounding area often means that children miss out on education during this period and often participate in informal labour. It is often the youngest children who fail to attend school as they are unable to travel to school unaccompanied whilst their parents are working; this is especially the case in the brick kilns, where accessing surrounding schools requires a walk of over an hour through the hazardous grounds of the brick kiln.  Recent research shows that of the 60,000 children living in brick kilns, 66% of those children asked during the brick making season said that they had never attended school.

The project aims to address the specific issues facing children at the various brick kiln communities across the Bhaktapur district in the Kathmandu Valley by establishing safe and secure schools. Each school will serve the children of the migrant workers and the surrounding catchment area where access to early childhood education, which is critical for children, is severely limited at best. Each school will include appropriate water, sanitation and hygiene (WASH) facilities including latrines, handwashing taps and drinking water that promote high standards of health and hygiene amongst the children and the community. Each school will comprise 1 classroom which will be fully furnished with the furniture required such as cupboards, carpets, tables and so on.

For the 6 months of the year that the brick kilns are closed, it is intended that the schools will be used to provide classes for children and adults who remain in the community with an accelerated learning programme where they learn a year’s curriculum in just six months.

The majority of migrant labourers are from lower caste and marginalised groups, and suffer from poverty, food insecurity and uncertainty regarding their futures. 65% of child labourers identified by brick factory studies were Janajatis (‘ethnic communities’) and 18% were the Dalit (‘untouchables’). Labourers also tend to come from the poorest and most deprived regions of a country where 25% of families are living on under $1.25 per day and thus have to migrate to the brick kiln areas. In addition, these workers are frequently bonded by debt to exploitative labour brokers as a result of loans paid with very high interest, and an insufficient wage to cover the payments.

For many, this will mean access to early year’s education in a safe, secure child-friendly environment for the first time.

Gulf for Good has supported this project through:

This group of eight raised AED38,975. Alongside a donation of AED10,000 from Al Rostwani / Arabian Automobiles (care of OmniCom Media Group), we are currently working on the expansion of the Bhaktapur centre. Currently, there are two groups of kids that use this centre, in the morning and afternoon. Expanding the centre will enable both groups to have full days in school. 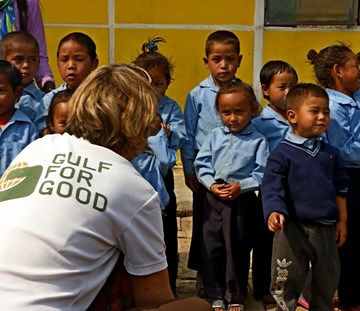 The Everest Base Camp Challenge Register your interest